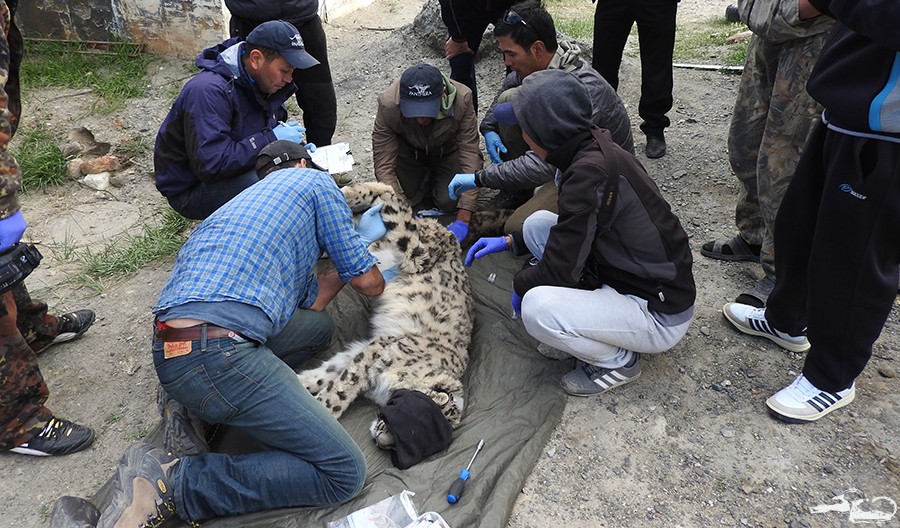 In honor of International Snow Leopard Day on October 23, I wanted to share the story of one snow leopard in particular, Shirin, and her incredible journey.

Last winter, I received one of those phone calls that never fail to make me tear up: a snow leopard had been illegally captured and sold in the eastern Pamirs of Tajikistan. The snow leopard, an adult female, had killed a Kyrgyz herder’s sheep, so he trapped it and decided to sell it to a dubious hunting outfitter. Hunting outfitters like these will let foreign hunters pay to trophy hunt snow leopards. The snow leopards are usually drugged in order to make them easier to shoot (click here to learn more about the illegal practice of trophy hunting on snow leopards).

Thanks to the intervention of Zafar and Atobek Bekmurodi, who run a conservation-minded hunting conservancy in the eastern Pamirs, where argali sheep and ibex are sustainably harvested, the snow leopard was freed and the herder arrested. Before being rescued, the snow leopard had spent several days locked in a wooden box.

Because of the long trial, the snow leopard—the “evidence” of the crime—could not be released and was kept captive for over a year. Throughout her captivity, she remained very aggressive and wary of humans. She was fed a diet of wild game: marmots, ibex and argali sheep. Every time I checked on her, her eyes were lit up with a fire and a fierce willingness to live. Finally, in June of this year, thanks to the intervention of the President of Tajikistan, and the support of the Tajik Committee on Environmental Protection and the Hunting Association of Tajikistan, she was released and we were able to equip her with a GPS satellite collar so we could track her return to her wild life. We called her “Shirin,” which means “sweet” in Kyrgyz; while her personality could not exactly be considered “sweet,” her rediscovered freedom was absolutely sweet.

For the first few weeks, we followed Shirin’s movements with much apprehension. As an adult female, it seemed likely she would remember how to hunt, but we were concerned nevertheless. Would she find a home for herself in the prey-abundant areas of Zafar and Atobek’s hunting conservancy? The data from her collar and the visits we made to her kill sites confirmed that she was hunting successfully.  Hunting conservancies like these are actually safe havens for snow leopards, even though that may sound counter-intuitive: thanks to the income from the hunts, Zafar and Atobek, as well as other nearby conservation-minded conservancies and conservancies, like the Burgut Conservancy in Alichur, are able to invest in antipoaching activities and meet some of the needs of local communities. The result is that prey for the snow leopard is plentiful.

Like all snow leopards, Shirin was full of surprises. She went right on through the strictly protected Zorkul area and crossed into Afghanistan through the Big Pamir. After venturing back to Tajikistan, Shirin ended up back in Afghanistan, crossing the Wakhan corridor and ending up in a side valley teeming with ibex. Though borders, time and space matter to us humans, they mean nothing to snow leopards.

We don’t know where Shirin will go next. Her survival depends on her ability to stay clear of livestock and herders on both sides of the border. Shirin’s story is one of hope and resilience, but it also reminds us of the many threats facing her kind. The days of commercial-level poaching may be gone for now, but human-wildlife conflict is the primary reason for snow leopard poaching and strategies to improve livestock management, such as building predator-proof corrals and deterring retaliation, must be scaled up. Shirin and her kind need help in Tajikistan, Afghanistan and across their range to avoid situations where the dietary needs of snow leopards clash with the livelihoods of remote communities.

Shirin also reminds us that wildlife conservation can truly be a catalyst for collaboration across the borders. On October 23, 2013, the 12 snow leopard range states made a commitment in Bishkek, Kyrgyz Republic by adopting the Bishkek Declaration; and the Convention on the Conservation of Migratory Species (CMS) provides a complementary framework for such collaboration. Just as Shirin ignores those political borders between Tajikistan and Afghanistan drawn on the map, so can we: by finding unity over what fills us with awe and inspiration.